Hampshire College professor Deborah Gorlin received the 2014 May Sarton New Hampshire Poetry Prize for her poetry collection, Life of the Garment. The award honors the poet, novelist, and essayist May Sarton (1912-1995) who has long been an inspiration to Gorlin. As winner of the prize, Gorlin’s book has been published by the independent press Bauhan Publishing. Her first book, Bodily Course, won the White Pine Press Poetry Prize in 1997.

Life of the Garment is arranged into three sections. The first third is comprised of elegies to the people and places in Gorlin’s life that are now gone. “It’s a monument of words to them,” Gorlin says, describing how she wrote to commemorate her family. She wanted to do the same for the place where she grew up, an industrial suburb in New Jersey. She calls the poems about her hometown “a belated love song to an unlikely place.”

The second part of the book is from the point of view of dolls from around the world. Gorlin became interested in this particular perspective when she realized how dolls can be perceived as a type of medium—not just as inanimate objects, but as “a bridge between the visible and the invisible.” These poems allowed her to explore outside of her own experience and to imagine the lives of people living in different places, cultures, and time periods.

The final section of the book addresses Gorlin’s spiritual struggles. “It’s about the perpetual work required to summon and to engage those divine energies and mysteries in the everyday world and within myself,” she says.

She describes how she enjoys “figuring and feeling things out” for herself, so that writing rarely seems like a task or an obstacle. “It only becomes difficult when I allow those awful demons—external judgment and comparisons with others—to discourage me. That’s the stuff that’s poison.”

Gorlin says writing is not about measuring up to others, but about “the joy of difficulty in the act of writing itself”––and when you “give up the desire to compete or achieve, your work will have its own rewards.” Her advice is to trust your intuition instead of trying to control where your writing goes: “In the end, there will be a poem, and it will be a discovery and a surprise.” The Center for Teaching and Learning invites you to celebrate our first annual recognition of teaching! Faculty will discuss their teaching insights, innovations, and strategies during one of the five 60-­‐minute panel discussions. As we acknowledge the work of our Division III students, we hope you will join us for the opportunity to also acknowledge the exciting teaching at Hampshire and to learn from our colleagues.

This is a unique writing opportunity designed for Hampshire faculty and facilitated by Cathy Luna, an experienced local writing coach and experienced instructor of higher education. Fellowships are six weeks long (May 6- June 30) with the option to continue through July and August.

As part of this program, Fellows will:

*Please note that Cathy Luna will provide assistance with writing strategies and practices rather than read and respond to participants’ writing.

Fellows will be expected to attend the kick off workshop, “Scholarly Writing: What Works for You?” on Wednesday, May 6, 5:30pm.

Faculty from all disciplines are encouraged to apply. Please contact Kristen Luschen at kluschen@hampshire.edu by Monday, April 20th to apply. END_OF_DOCUMENT_TOKEN_TO_BE_REPLACED 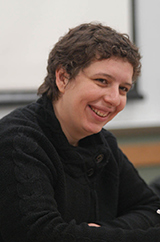 Professors Polina Barskova and Herbert Bernstein are the 2015 winners of the Gruber Awards for Excellence in Teaching and Advising.

Established in 2011 by Hampshire College graduate David Gruber 72F, the awards highlight best practices in teaching and advising. Each winner receives $10,000 and, in the year following receipt of the award, either gives a lecture or organizes a symposium to share teaching and advising techniques with other faculty.

The award review committee, which chooses finalists based on nominations made by the Hampshire community, wrote that Barskova “is an ethereal presence in the classroom, captivating her students in way that makes learning effortless and inspiring a mentor/student relationship that often extends far past a student’s tenure in her classroom.”

“I think that working at Hampshire, to a huge extent, is about dialogue with students,” Barskova said. “It’s one of the most intense classroom processes I can imagine. It’s all about reacting to them and them reacting to you, one hundred percent of the time, because of the nature of what we do here. To hear back from them in such a beautiful and generous way was a gesture of trust.”

In four decades of advising, Bernstein has worked to build academic and personal ties with his students while adapting his approach to meet the learning differences of each of them. The committee wrote that he is “proven to go above and beyond normal expectations of both personal and academic support and guidance.”

“Advising, in a sense, is at the core of being a Hampshire professor,” Bernstein said. “It’s about taking seriously the changes that can occur with an appropriately empowered student during their time here. You have to know a lot, but you also have to realize they may be more of an expert than you are, especially on the subject of their Div III work.”

Gruber was excited to learn that Bernstein had been chosen, as he credited his former professor as an inspiration for the awards.

“It’s difficult for me to imagine having been a success at Hampshire without a strong advisor/advisee relationship like I had with Herb,” Gruber said. “He keeps on top of how your studies are going, but also how your life is going.”

When developing the award process, it was important that students make the decisions, Gruber said: “It’s intended to be recognition from the community. Who knows better than the students which faculty members are the great teachers and great advisors?”

Five College Digital Humanities is working to develop a portrait of how different humanists use digital technology in their research, teaching, and creative work. Our most important tool for this is the 5CollDH community assessment survey, which responds to the different ways we all use technology in our scholarly lives. We invite responses from all members of the Five College academic community– staff, faculty, students, and administrators.

This process will only work if we get as many responses as possible. The survey takes anywhere from five to fifteen minutes to complete, depending on how much you would like to say right now. It would be so great if you could take the survey before April 20th.

In recognition of everyone taking the time to complete this task, 5C Digital Humanities is raffling gift cards to a variety of Valley establishments. Anyone who takes the survey is eligible to win!

The UMass Center for Teaching & Faculty Development is hosting a series of diversity-related workshops this spring that are open to Five College faculty.  Please sign up for the first this spring!

What: Positionality: How Does ‘Who We Are’ Affect ‘What We Do’?
Speaker: Dr. Jesse Tauriac
Audience: All instructors
When: Thursday, January 29th from 9 AM to 11 AM
Location: UMass Amherst Campus Center (room given after registration)
Register: https://www.surveymonkey.com/s/positionality

DESCRIPTION: Often when educators consider starting classroom discussions about multiculturalism and bias, emphasis is placed on analyzing student viewpoints or societal perspectives about various diverse communities and forms of oppression. Much less considered but, arguably, more important is an exploration of our own personal backgrounds and identity dimensions, and recognition of the ways these shape our perceptions of and experiences with individuals from a range of backgrounds. This two-hour, interactive workshop will guide participants in examining and discussing meaningful aspects of our identities, and drawing links to the ways we engage diverse individuals and multicultural topics.

5C Blended Learning Workshop Cancelled. Due to the impending winter weather and the frenzy of the end of the semester, the 5 College Blended Learning Team has decided to postpone their second blended learning workshop to some time early in the spring semester. More details soon.

Apologies for any inconvenience – more after the winter break.

This Blog is a new feature of the CTL. You should visit often to see tips, resources, and announcements of programs. The blog is meant to be a place to share our teaching stories and strengthen our culture of talking about our teaching. It is also a place to come and find out what is happening in college teaching beyond Hampshire.

Send any stories of your own or ideas of interest to ctl@hampshire.edu!