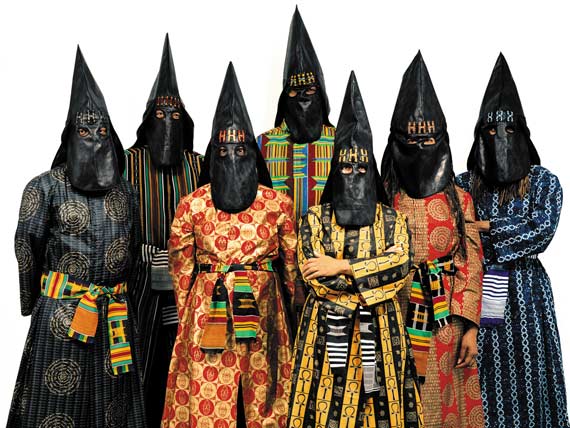 This image by Fiona Foley appropriates the look of the American Klu Klux Klan, but manages to turn it on its head. Rather than the traditional plain white sheets known to have been worn by many within this terrorist group, the African-American models in this photo are clad in Dashikis of various colors and patterns. Foley’s masterful reconstruction of an otherwise white-supremacist uniform into one meant to reflect African agency and cultural ideas, represents a striking yet sobbering inversion of the colonial gaze. Some of the robes worn by the models bear swirling patterns, others Ankhs while others still are heavily inspired by African Kente cloth, known as nwentoma by the Akan peoples of Southern Ghana from which it originated. Each model wears a sash made of Kente cloth and a black leather hood with the letters “HHH” sewn into the forehead.