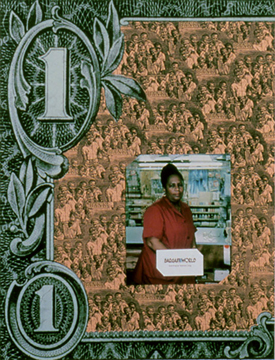 Lorraine is a combination of screen printing, photography and thermography. Nari Ward, famous for creating works from mundane objects found in his neighborhood, uses his art to interrogate issues of social justice, race, consumer culture, and economic disparity. This work presents the story of Lorraine, a woman once used as an iconographic model for Jamaican bank notes who now works at Bargain World dollar store. In juxtaposing the image of Lorraine in her Bargain World work attire with an altered American dollar bill covered with children of color, Ward exposes American capitalism as a cruel system that values bodies of color only as a source of labor.