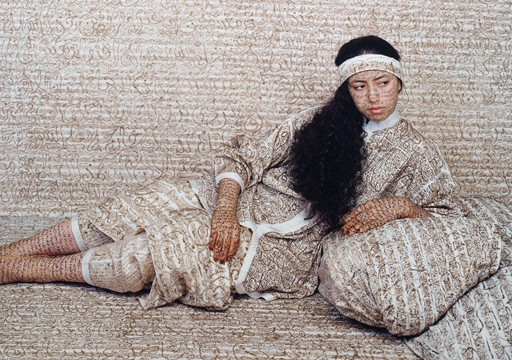 In this photograph, Moroccan artist Lalla Essaydi blurs the line between Western, Orientalist nudes of the nineteenth century and the lived experiences of contemporary Arab women. Essaydi here repeats her signature artistic practice of physically covering both her model and the background setting in Arabic calligraphy. Done in henna, this elaborate, elegant text fuses the traditionally feminine decoration of henna with the historically masculine practice of calligraphy. In blanketing her female model in Arabic writing, Essaydi thus makes explicit the laws and limitations that have been inscribed onto female bodies of color throughout time. It is significant here that Essaydi’s model, though positioned in a variation on the sexually suggestive pose of an archetypal Orientalist nude, refuses to meet the viewer’s eye. Essaydi’s script often consists of the artist’s own philosophical musings, including questions like “Am I independent or not?” Works like this photograph that allow their female subject to refuse the Western gaze seek to answer that very question.