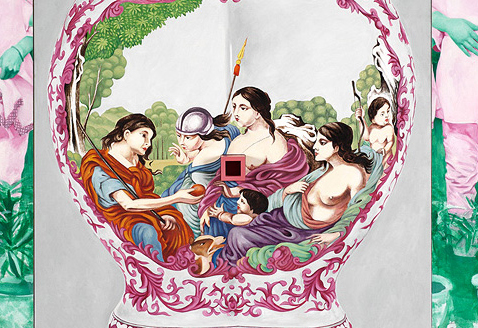 The Judgment of Paris

The left and right panels of this work both depict young Chinese girls dressed in pink; they are standing among potted plants and looking straight ahead. The center panel features an ornate vase depicting a man sitting to the left of three nude women meant to represent the Greek goddesses Athena, Aphrodite, and Hera. The goddesses are in anticipation of the judgment of Paris, who has been deemed fit to decide which among them is the fairest. Hung Liu has been creating art in the United States since 1984, and is known for creating works inspired by Chinese culture and history. The Judgment of Paris incorporates both Western, Roman imagery and that of Liu’s Chinese heritage. Liu’s melding of Romantic themes with her own unique style complicates the colonial gaze by appropriating an iconic Western narrative and placing it within an entirely new context.