On September 9, 2016, incarcerated individuals across the United States embarked on the first national prison labor strike in US history, timing the action to coincide with the famous Attica prison rebellion of 1971. Despite increasing media and scholarly attention to the unprecedented rise in incarceration over the past four decades, many remain unaware of the complex and interrelated incentives that underlie this uniquely American phenomenon, a system “Made in America.”

The 13th Amendment to the US constitution outlawed slavery and involuntary servitude, but it retained an exception for unfree labor as “a punishment for crime whereof the party shall have been duly convicted.” This exception opened the path for the convict leasing and chain gang labor that supported rapid industrialization in the American South. Today, in the age of mass incarceration, this exception underpins multiple forms of economic exploitation, in which incarcerated folks – disproportionately low income people of color –  are employed at cents per hour, with no benefits.

The work programs put in place by Congress in 1979 claimed to provide marketable skills for reintegration. While some fulfill this mandate, many are merely a rhetorical veil by which state governments employ cheap labor to produce goods (from office furniture to military gear) and provide services (such as firefighting or snow shovelling) to offset their budgets. Private corporations garner profit and political capital by “in-sourcing” their labor to prisons rather than out-sourcing overseas. Simultaneously, incarcerated people largely lack the consumer choice of people on the outside: every day they confront monopoly prices, from commissary goods to telephone services, and must navigate myriad legal and healthcare fees, family support and restitution payments.

Made in America features the work of artists and activists, inside and outside prison, exposing faultlines between exploitative economic interests and the creative and intellectual labor of incarcerated individuals and returned citizens. These works offer powerful articulations of subjecthood and resistance in the face of a dehumanizing system. Bringing together diverse artistic projects, the exhibition investigates the value of human capital, and coerced and creative labor in an advanced capitalist society.

This program is supported in part by a grant from the Amherst Cultural Council, a local agency which is supported by the Massachusetts Cultural Council, a state agency, as well as a grant from the Cultural Foundation of Western Massachusetts, through Credit Data Services, Inc. Fund. Additional support comes from the Feinberg Family Distinguished Lecture Series at the History Department of University of Massachusetts at Amherst. At Hampshire College, the exhibition and related programming are supported by the President’s Discretionary Fund, the School for Interdisciplinary Arts, and the Office of the Dean of Faculty. 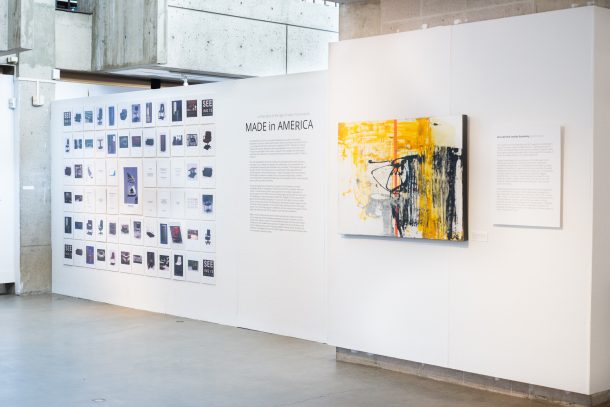 Installation shot of the front wall, featuring works by Sheila Pinkel (left, “Prison Industrial Authority,” 2012) and Jared Owens (right, “A spot on the concrete floor I could see from my cell window in solitary, where the paint is worn away, from the repetition of food carts, and foot traffic, wearing the surface of the orange boundary lines through friction and repetition,” 2017). 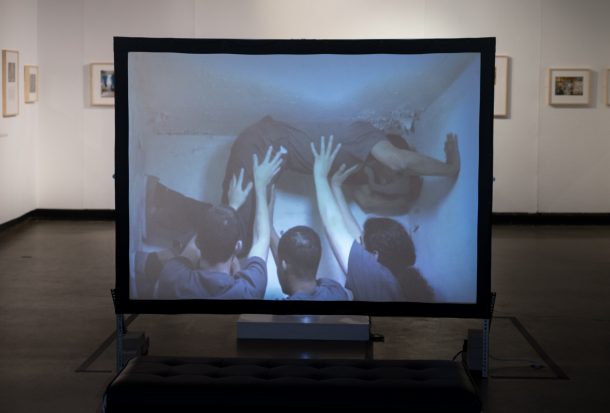 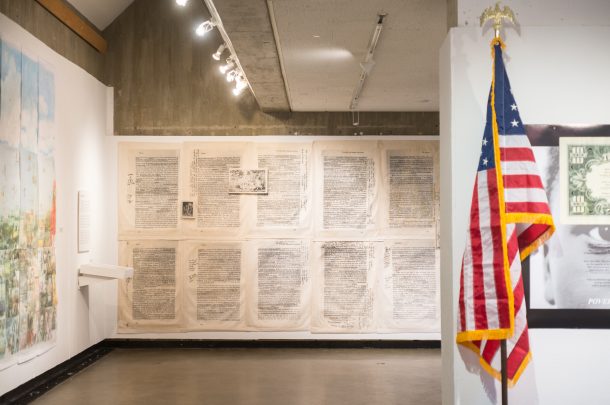 Jesse Krimes work next to an American flag made by U.S. Prison inmates, a part of a Sheila Pinkel installation. 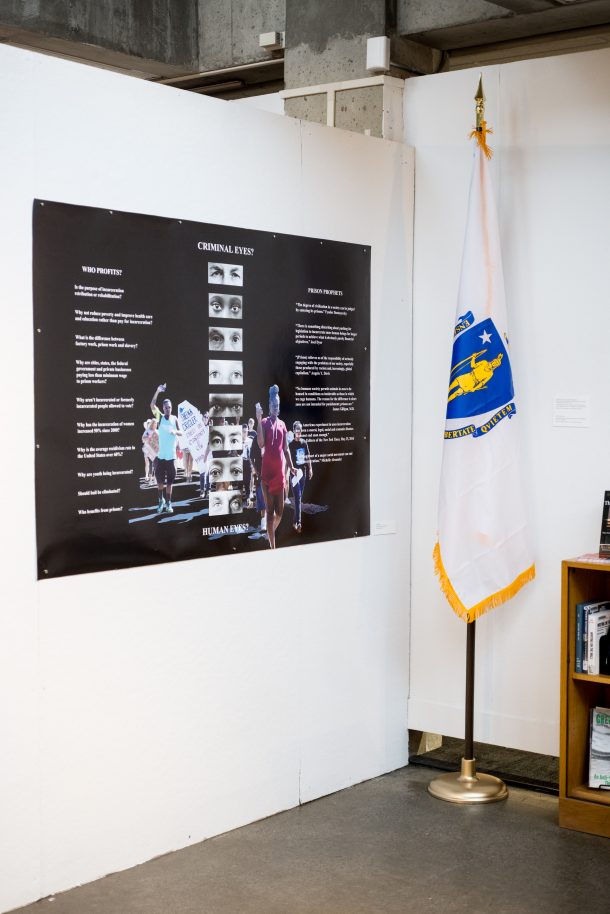 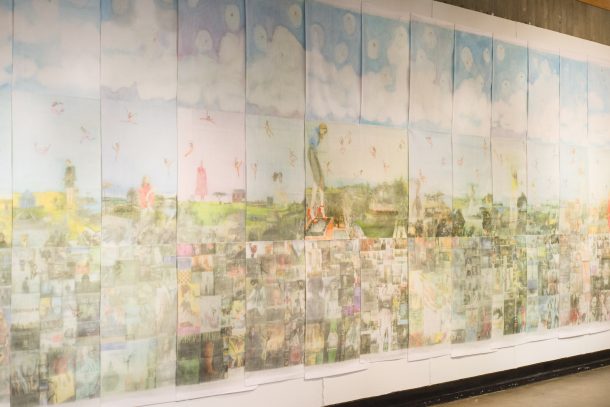 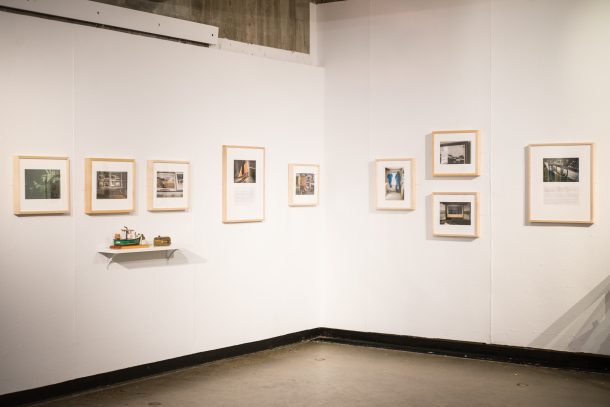 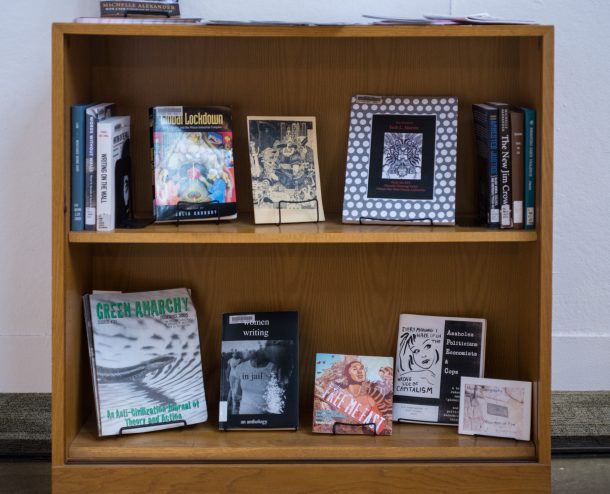 A selection of suggested readings to go along with the exhibition. 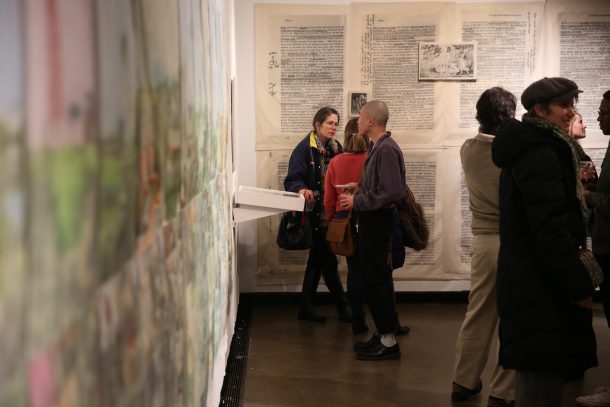 People at an opening! 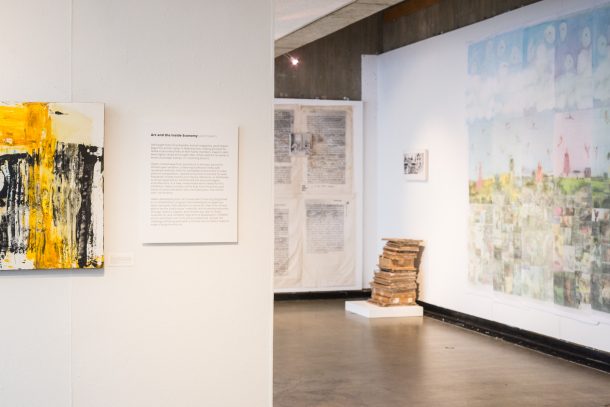 Made In America installation shot 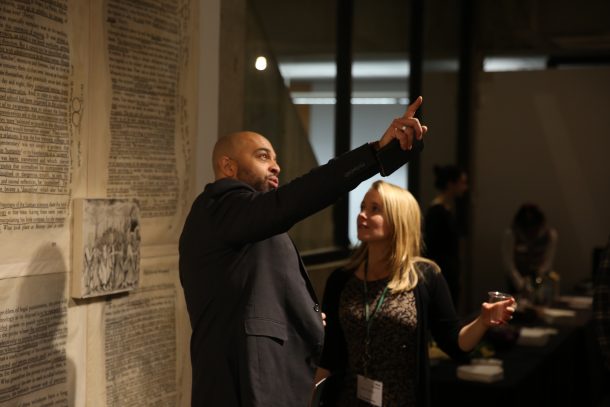 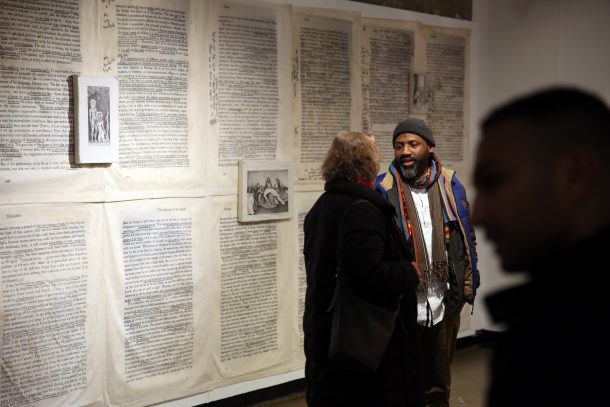 People at the exhibition opening in front of Jesse Krimes work. 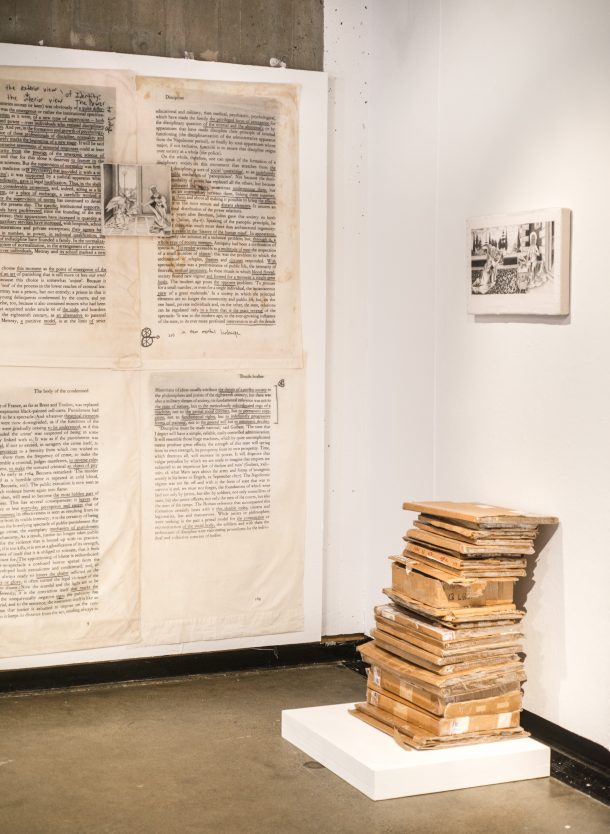 Jesse Krimes’ work, including the shipping boxes that were used to smuggle his work out of prison.

Made in America opening reception

Join artists and activists, local organizations, community members and carceral studies scholars for the official opening of Made in America, as part of Amherst Arts Night Plus. Opening remarks at 6pm. Refreshments will be served.

Find out more about, and try your hand at, the print transfer technique Krimes developed in federal prison, and how he explores materiality and mediation in his work. Limited to 14 students, open to Five College students. Registration required (email arts barn alum intern: sac11@hampshire.edu).

Krimes and Owens met while incarcerated in federal prison, where Owens worked to rejuvenate a long-neglected arts program and helped Krimes navigate life and art on the inside. Working in very different styles, they will speak about their creative work in prison, and in the Gallery’s exhibition.

Jesse Krimes is a Philadelphia-based artist Jesse Krimes holds a BA in Studio Art from Millersville University.  His work investigates the human condition in an attempt to disentangle complex value systems and hierarchies.

Jared Owens is an abstract conceptual artist based in Charleston, S.C. A New York native, Owens’s art career began as a self-taught artist ten years ago in federal prison.

The Prison in Twelve Landscapes

Screening and Q&A with Brett Story, Director of The Prison in Twelve Landscapes

More people are imprisoned in the United States at this moment than in any other time or place in history, yet the prison itself has never felt further away or more out of sight. The Prison in Twelve Landscapes is a film about the prison in which we never see an actual penitentiary. Instead, the film unfolds a cinematic journey through a series of landscapes across the USA from a congregation of ex-incarcerated chess players shut out of the formal labor market, to an Appalachian coal town betting its future on the promise of prison jobs.

Late opening and exhibition tour, as part of Amherst Arts Night Plus. Enjoy evening opening hours from 5-8pm and a guided tour of the exhibition at 6pm.